Home » Remarketing for Google and Facebook Ads, The All You Need to Know Guide

We will help you make Remarketing Ads work for

Remarketing Ads: Find out everything you ever wanted to know about Remarketing and Retargeting across the major platforms including Google, Facebook, Bing and many others.

If you want to know if your business is a good fit for Remarketing ads, or if your Retargeting ads are working as hard as they could be, simply book in for your 100% free Remarketing PPC audit!

Will be our next happy Remarketing Ads client ?

Remarketing Ads campaigns can increase brand awareness. But most importantly, remarketing holds the power to convert your existing audiences into active, loyal customers.

Remarketing helps you to reach the people who have already shown an interest in your products or services by interacting with your app or website. 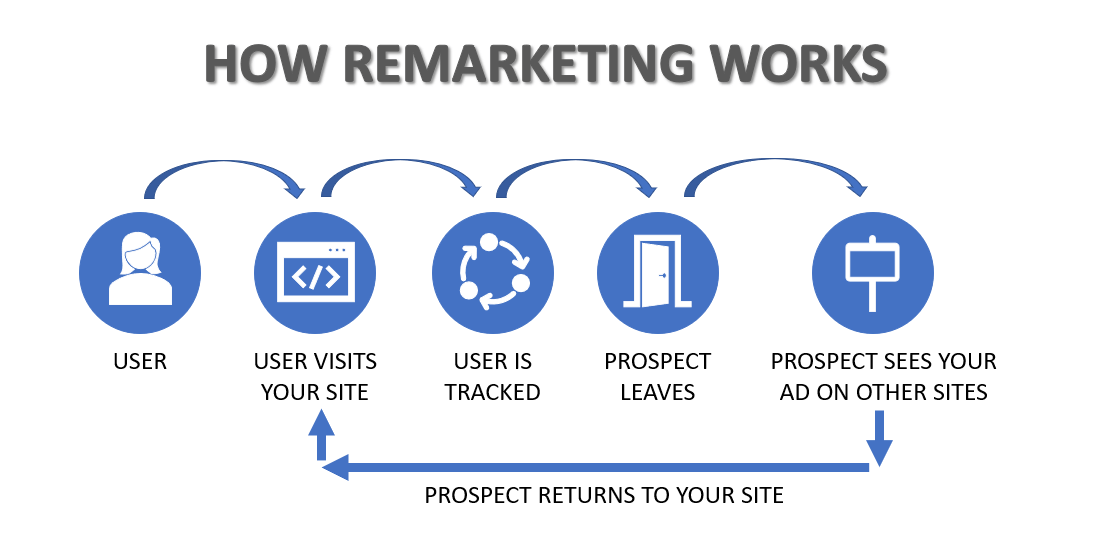 Remarketing is often seen as a more natural way of advertising; it reminds users about brands they are interested in, rather than pushing vague, salesy ads that aren’t relevant.

Get Better Results From 's Remarketing?

We are award-winning Pay Per Click advertising specialists, known for seamless management and exceptional results.

Please don’t hesitate to get in touch today for your free Google Ads audit.

You are under no obligation to choose us to fix any issues. However, our team will be on hand if you wish to use our experts to enhance your Remarketing Ads. 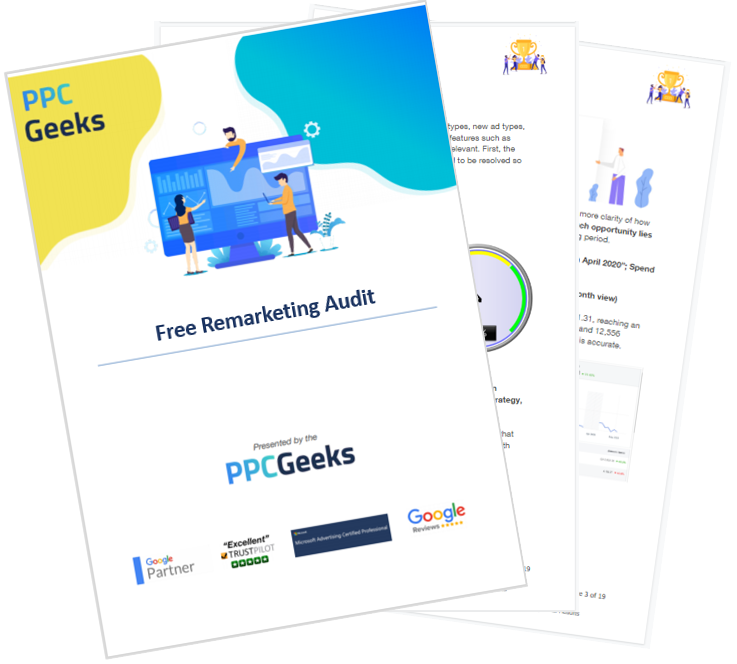 How Does Remarketing Work?

When you retarget your Google Ads, you can strategically prompt audiences to return to your website. You can remind them to complete a call to action, or persuade them to reconsider purchasing a product they left in their basket.

For example: a potential customer who has been looking at a particular pair of trainers on your website may leave and reconsider. However, instead of advertising to them again, remarketing allows you to remind the user over time. This works by showing ads for the same pair of trainers while they browse Google and its partner websites.

Remarketing can be a highly effective tool for driving sales and increasing brand awareness. It is a form of advertising that allows you to reach your customers in an indirect, less intrusive way than traditional advertising.

There are a multitude of benefits to remarketing that you should take into consideration:

How Are Your Remarketing Ads Doing?

Get your 100% Free Remarketing Ads Audit here and find out How To Get Better Results Fast!

Remarketing allows you to target your audiences more effectively. Audiences who have already engaged with your mobile app or website, have already shown an interest in what you offer. So, they are more likely to make a purchase. Furthermore, it’s suggested that the more times users see an ad in a remarketing campaign, the higher your conversion rates will be.

Not forgetting, timing is everything. Your audience may not complete a transaction on their first visit because they are waiting for another time. For example, customers may wait until payday, or until a family member’s birthday is coming up. Thus, it is well worth investing in nurturing your existing audiences and prompting them to return when the time is right for them.

2. Remarketing can help potential customers to find you

Remarketing can help potential customers to find your website with ease, as Google will show users your ads when they Search for your brand name or related products.

This can help build brand awareness and cultivate a more engaged audience over time.

3. You can you create remarketing lists with large-scale reach

For example, you may decide to set up a list that targets users who have added your items to their shopping cart/saved them onto a wish list, but didn’t complete a transaction.

Remarketing also allows you to reach audiences on a large-scale basis. Your ads can be shown to users across each of their devices, while they browse over 2 million mobile apps and websites.

4. You can use automated bidding for retargeting ads

Google makes remarketing easy by allowing you to use automated bidding. This will help you to create remarketing campaigns and stay within your budget.

Google’s real-time bidding feature can calculate the optimal bid for the user viewing your ad and help you to win the ad auction at no extra cost.

5. Remarketing campaigns can be engaging and creative

If creating your ads sounds daunting, there’s no need to worry. You can start creating your own remarketing ads for free using the Google Ad gallery.

You can either take full advantage of the gallery, or let your creativity shine. You’ll have the option to produce text, image and video ads that reflect your branding. You can also make use of Ad gallery layouts to ensure your ads are well presented.

6. You can monitor how effective your campaigns are

It’s important to track how well your remarketing campaigns are doing. To help you meet your goals, Google offers clear campaign statistics. These outline how well your campaigns are performing, where your ads have been shown to your audiences and the prices that you are paying.

This is especially useful, so you can make the necessary adjustments and improvements to your ads over time to drive more sales.

7. Remarketing can help you reach your competitors’ audiences

Remarketing can allow you to reach your competitors’ audiences too.

Since remarketing targets users who have searched for a particular keyword or visited your website, you can target potential customers who are also browsing your competitors’ websites or viewing related products.

Remarketing Strategies You Should Use

To help brands make the most of remarketing, Google has provided a helpful range of remarketing strategies to consider using. The extensive list includes:

When Did Remarketing/Retargeting Start?

Google Adwords (now known as Google Ads) introduced remarketing in 2010. But, initially, remarketing wasn’t quite as easy as it is today.

In 2010, if you wanted to remarket to your audiences, you would have needed to add a code to each page on your website. On every single one where you wanted to capture user’s cookies and retarget them in future.

Following this, Google continued to adapt its remarketing strategies and in 2012, Google linked remarketing to Google Analytics. This simplified the process and enhanced opportunities to reach and retarget audiences.

In 2013, remarketing was taken to a new level, as Google launched remarketing for search. Essentially, this gave brands the power to utilise more effective bidding strategies. Including the freedom to bid on expansive terms for audiences who had previously visited their website, but did not complete a transaction.

The update also allowed brands to remarket to previous visitors by presenting them with tailored messages suited to the user’s needs or interests. For example, discount codes to prompt them to buy products they have looked at in the past.

Get 5-Star Remarketing Ads Results With Our Free Audit

With so many benefits to remarketing, it’s no surprise that the method has become so prominent. Retargeting on Google and Facebook is one of the most effective advertising strategies for success.

Facebook’s success stories for retargeting include leading names such as Mercedes-Benz AG Europe, IKEA Finland and Air France, while successes also feature an array of small and medium-sized enterprises.

Why You Should Not Use Remarketing/Retargeting

Remarketing can feel intrusive when it is not done well. You don’t want users to feel that your ads are following them around, without offering any value.

To avoid this problem, it’s essential to retarget ads thoughtfully to your users. This can be done by considering the brand experience you’re offering. Think about how the ad will benefit your customer and why it is relevant to them.

It’s also essential to design high quality ads, designed to drive sales, rather than clicks. This can be achieved by making your ads interactive, or by incorporating useful information and high quality images into them.

Do You Need Help With Remarketing?

At PPC Geeks, we provide extensive services to help clients reach their marketing goals. We are award-winning Pay Per Click advertising specialists, known for seamless management and exceptional results.

Please don’t hesitate to get in touch today for your free Google Ads audit.

You are under no obligation to choose us to fix any issues. However, our team will be on hand if you wish to use our experts to enhance your Google Ads and show you how to get better results from your Remarketing Spend.

FREE Remarketing ADS REVIEW
We use cookies on our website to give you the most relevant experience by remembering your preferences and repeat visits.
Cookie SettingsAccept All
Manage consent